Since 2009, New Orleans has been a little less vibrant. Beautiful, magical, intelligent, spiritual, and loving are just a few of the many words that can be used to describe Cayne Miceli, a proud resident of the Crescent City. Those who were lucky enough to cross Cayne’s path were left with memories that will last a lifetime. Although her life ended far earlier than it should have at the hands of Orleans Parish Prison staff, Cayne’s legacy deserves to live on. This dossier is dedicated to shining a light on the life that Cayne lived and how she is remembered today.

Cayne’s journey through life began on November 4, 1965 when she was born to Elouise and Michael Miceli in 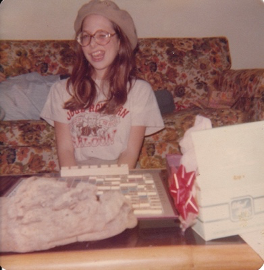 Opelika, Alabama. Mr. Miceli was a hard-working businessman. He was a member of the United States Marine Corps, obtained a degree in Education, and owned various businesses. Cayne had two loving sisters named Cristy and Sophia. Her sisters continue to share memories, photos, and of Cayne on a Facebook page dedicated to keeping Cayne’s memory alive. Cayne was also married to a man named Kevin for five years.

Cayne was a brilliant student who graduated second in her class from Foley High School in Alabama. Upon graduation, Cayne attended the University of Florida on a full scholarship. She also attended Pensacola Junior College and the University of New Orleans. After receiving a degree in urban planning, she had hopes of finding a job that would have a positive effect on the environment. When she made it to New Orleans, she was known as a “Mid-City girl.” After Hurricane Katrina, Cayne hopped around a bit, staying in places such as Nashville, Oakland, and California’s Bay Area. However, it was clear that “she needed New Orleans and New Orleans needed her.” Regardless of where she was, she touched the lives of many and left lasting impressions on those around her.

A creative soul, Cayne was known for her dancing, drawing, writing, jewelry making, and overall love of the arts. Her sisters occasionally share the beautiful artwork that Cayne drew on her memorial Facebook page. She had friends from all over that shared her love of the arts- Pensacola, Oakland, Ojai, San Francisco, Nashville, and more. Regardless of where her friends were from, they all knew that Cayne was happiest when she was dancing. A friend from Pensacola named Mama Trish expressed that whenever she thinks of Cayne, she thinks of her smiling and dancing. Another friend from years past reminisced on the time he spent with Cayne at the University of Florida. He paid a tribute to Cayne on a blog saying “[E]ven after 23 years, she still affects me … We dance for you.” Cayne was also a talented jewelry maker according to a friend from Pensacola who shared that she asked Cayne to make a new ring out of her high school ring, and the ring turned out better than expected. The ring was incredibly detailed with silver vines and gold leaves. The friend called it a “one of a kind, Cayne Creation” that she has misplaced but always finds.

Cayne also loved everything about music. A friend of hers shared that they “will go to [their] grave turning down offers to meet people at bars that don’t have live music by quoting Cayne: ‘When I go to a bar and there’s no live music, I’m just an aging barfly.’ She was passionate about live music, supporting brass bands, and second lines.[23] Cayne attended all types of music festivals, from Jazzfest to Burning Man. She spent time working for a local music television station called the “Louisiana Jukebox.” Dave Jordan recalls meeting her when his band played at the station. After Hurricane Katrina, he formed another band that raised money for Hurricane Katrina victims, and Cayne attended nearly every one of the band’s events.

Amy Stewart, a friend that spent a lot of time dancing with Cayne, remembers Cayne for her creative writing and the beautiful costumes that she designed. In a piece titled, “How’s N’awlins? New Orleans is good :)” that was written in the wake of Hurricane Katrina, Cayne wrote about the free music that you can hear everywhere in throughout the city and how “[y]ou can dance with your whole body here and everyone approves.”

Since Cayne’s passing, the New Orleans community has been missing the “thread that brought everyone together.” “She walked through all the worlds” and was friends with people of every class, race, background, and community. When it came to social organizing, planning and hosting, Cayne was ahead of the game. There weren’t any social 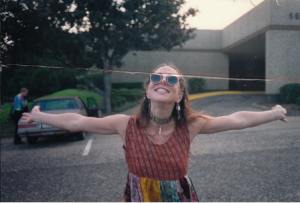 media platforms that made it easy to gather people quickly or spread the word about events, so Cayne did what she could to bring all of her people together. She would take the time to type out a long and detailed text message using her t9-style phone about events in the area to people she knew would appreciate it. These events typically included second lines, bars with live music, and even parades. Cayne’s friends say she was like the human version of a parade tracker phone application — she knew exactly where the parades were and the best spots to watch them.

Cayne’s life was tragically cut short on January 6, 2009. Following a life full of love, Cayne’s life was celebrated the way she told her friends she wanted to be — with a second line on Mardi Gras. Masses of friends and family paraded down the street calling themselves the “Krewe of Cayne.” They even carried a banner with their group name etched on the front.

In the wake of tragedy, Cayne’s light still shines through. Cayne’s story has been shared across the country and has helped to illuminate the institutional failures that have occurred in New Orleans. Cayne’s father filed one of several wrongful death lawsuits in federal court against Sheriff Marlin Gusman and other Orleans Parish Prison staff. Sheriff Gusman settled the lawsuit for $600,000.

Two years after her death, Cayne’s story made national news when it was aired on a PBS “Frontline” episode that collaborated with NPR and ProPublica. The series examined the “the nation’s 2,300 coroner and medical examiner offices[, which revealed] a deeply dysfunctional system that quite literally buries its mistakes.”

Finally, Cayne’s family and friends joined many other families in advocating for change on behalf of their loved ones to Judge Africk in the hopes of placing the Orleans Parish Prison under a federal consent decree. Judge Africk approved the consent decree, indicating that it is “the only way to overcome the years of stagnation that permitted [Orleans Parish Prison] to remain an indelible stain on the community, and it will insure that OPP inmates are treated in a manner that does not offend contemporary notions of human decency.” 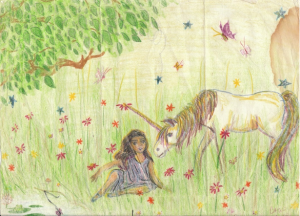 A drawing by Cayne Miceli

Family and friends still remember Cayne for her love of life. “She looked at everything with beauty and compassion. She had an understanding for the world and had a love for other people. She was ‘real,’ meaning that

even if things were dark, she could find the light.” Cayne’s friends purchased a brick in her honor to be placed at the Maple Leaf’s renovated patio.Her spirit and kind soul can be found in places throughout New Orleans  — where there is live music, dancing, and festivals. These are just a few examples of how Cayne Miceli’s memory lives on and continues to have an impact on friends, family, and communities across the country.

Spring is in her full on glory…

French Quarter Fest is next weekend

and Jazz Fest will be two weeks after that…

and the city is rebuilding itself piece by piece…

what used to be one freshly painted renovated shop or house on a bombed out street looking tragically hopeful is becoming two and three and six, etc…

In my neighborhood you can barely tell anything ever happened except for the continuing renovations here and there and lots of fresh paint… even the houses that survived basically intact are getting the once over or the boost… and by freshly painted I mean bright colors: purple, green, blue, pink, and multi… literally this morning I stopped my car to count 6 different candy colors on the front columns of a single shotgun house… I saw a Baptist church on Claiborne Ave with 3-story columns painted bright purple!

The roads are exceptionally bad (no dirt surfing here – but then we have no hills, only bridges)

Things I have seen placed by residents into potholes to keep themselves and others from falling in: the wheel of a car, a door, an appliance (maybe a clothes washer, maybe a dishwasher, not sure), a chair, and two chairs (it was a deep hole, one was not enough!), these are all different potholes…

My drive to work takes me through City Park and since the golf courses are presently closed and not being maintained, they are turning into exceptionally beautiful pasture land graced with ancient oaks… the greens, etc are now looking like Indian mounds…. but then I’m not a golfer and I’ve always thought golf courses to be an obscene waste of land… particularly because of all the chemicals used to maintain them…

and FREE MUSIC!!!! really really good free music… in the streets…. in the parks… in the clubs…

and even the people doing well are apt to be busted broke,

but I think the lack of money is like a great equalizer that existed even before the storm and it’s more true than ever now:

A LOT of respect is paid

and a LOT of value is placed

on what you can DO

rather than what you can buy…

and everything good that comes back is celebrated…

You can dance with your whole body here and everyone approves

and from babies to old folks, if they can stand up they will dance with you 🙂