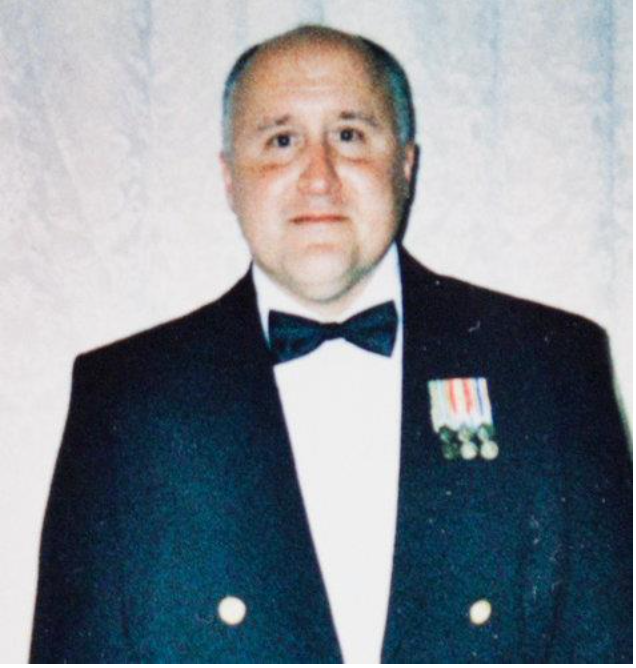 William Wesley Goetzee was the kind of guy who would give you the shirt off his back, said Kevin Robb, a former co-worker who had manned the 8th District Coast Guard command center with Goetzee for over a decade in the 1990s and early 2000s. To someone who was close enough to know Bill in that position, it seemed there were two most important things in his life: his love and devotion to his life partner Donna Gauthier, and his extraordinary pride and dedication to excellence in his position as a Coast Guard commander. Robb ventured to guess that maybe, those two facts were what Bill was most proud of, and what he might like to be remembered for.

Born November 14, 1962 in the small town of Plainfield, New Jersey, Bill was the second of three children. His mother, Helen Seman Goetzee, passed away when the children were young, and the three siblings grew up with close, loving relationships that lasted for the rest of their lives. Bill’s sister, Margaret, wrote that she continued to call her brother “Billy” even after he became a commander in the U.S. Coast Guard, and that at the time of his death, theirs was one of the most important relationships in her life. They worked together to care for their aging father, John, until his death in 2003. In 2011, Margaret and their younger brother, Eric, were planning a trip to meet Bill’s fiancé before their upcoming wedding. 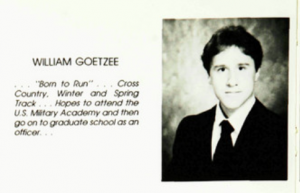 Back in 1960s New Jersey, the family moved from Plainfield to Scotch Plains. The Goetzee kids were all actively involved in local athletics and community events and attended Scotch-Plains-Fanwood High School. At SPFHS, Bill excelled academically and in sports – he was on the Honor Roll every semester of his high school education. Scotch Plains and the surrounding area was a close-knit community of small towns. Local newspapers printed the academic and sports achievements of local students every few months and wrote about their plans for the future, and maintained a bustling, cheery social happenings section that detailed weddings, engagements, celebratory functions, festivals, and other meetings and goings-on. Bill, Margaret and Eric’s names all appear several times during their teenage years as academic all-stars, members of wedding parties, and winners of contests at local festivals. Being close in age, Bill and Margaret shared close friends and engaged in the usual teenage shenanigans to test the patience of their father, John, who nevertheless maintained a positive attitude. Bill ran track and cross country and his graduation yearbook photo testifies to his love of the sport, with a caption, “Born to run!” In that same yearbook, he shared that after graduating he hoped to attend the U.S. Military academy and graduate school and to someday become an officer – demonstrating his commitment to a life of public service even at a young age.

After high school, Bill started to embark on those plans – first working toward earning his pilot’s license, a dream inspired by the Naval career of his father, John Goetzee. He eventually earned a private license and continued to share his pride in that achievement for the rest of his life. He attended a local community college to earn his first of many degrees – an Associate of Applied Sciences, which led him to his first career as a chemist for a local pharmaceutical company. He would maintain a relationship with that same company for years, returning after more education and experience to work as a Quality Assurance chemist.

As a young adult in Scotch Plains, Bill also began to develop an interest and expertise in emergency response. He earned an Emergency Medical Technician certification somewhere along the way and joined the Scotch Plains Rescue Squad – the oldest volunteer emergency medical response team in Union County, New Jersey, with the motto: “Neighbors Helping Neighbors. We Work For Pride Not Pay.” The squad provided, and still does today, voluntary emergency medical response for the community as well as emergency preparedness workshops, CPR training, and the free loan of crutches, wheelchairs, and other medical equipment for residents in need. All of their members are volunteers with EMT certifications and provide auxiliary membership and training for teenagers as young as 14.

Bill continued his education and earned a Bachelor of Science in Engineering before moving on to the next stage of his career. His first venture into the military was enlisting in the Navy Reserve, where he built on his aviation skills to become an Ensign Student Pilot Aviator and earned his certification of solo flight. After completing his service in the navy, he returned to Pharmacare, and earned a Master’s Degree in Occupational Health and Safety. That expertise led him toward his next major achievement – a commission into the U.S. Coast Guard, where he was stationed in Louisiana in 1998.

The office of the 8th District’s Coast Guard station sits on the top floor of the towering Hale Boggs building in downtown New Orleans, shared with the U.S. Federal District Court. On the 13th floor, a dim carpeted hallway leads to a doorway marked “Command Center.” Inside, a series of offices rotate around a reception desk, labeled with their roles and duties for emergency response scenarios. A deep red metal door marked “AUTHORIZED PERSONNEL ONLY” leads to the watch station – where a coast guard reservist stands guard, 365 days a year, looking out over the river for signs of distress or disaster. Now, those guards work 12-hour shifts. In the 1990s and 2000s, the shifts were still 24 hours long. Bill started his New Orleans coast guard career in that position, working the day-to-day grind of standing watch over the delta and dispatching responses to rescue people from the water, or organize response to pollution events.

Everyone’s motivations for joining the military are different. However, the Coast Guard is also different from the other branches. When asked why he was inspired to dedicate 49 years of his life to the U.S. Coast Guard, career reservist Kevin Robb described it this way: “Every Coast Guard mission is a feel-good one. You could call us the wimps of the U.S. military, because all we’re doing is trying to save people. But there’s nothing like the feeling of pulling a person out of the water, to safety. You’re just doing good. I believe in the mission.” While it’s impossible to understand the inside of Bill’s mind, his career path shows a continual commitment to developing the best skills possible to respond to people when they needed help the most. 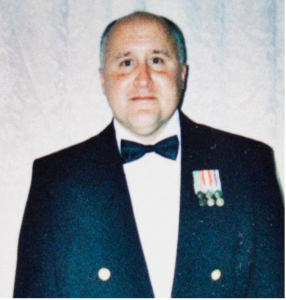 Sometime during his initial stint in New Orleans, he found something even more compelling than a dedication to rescue and service. He met Donna Gauthier, fell in love, and decided to stay in New Orleans for good. Donna, a former U.S. Coast Guard civilian herself, is described as an incredibly positive influence on Bill’s life by Bill’s friends and family. They doted on one another, adored each other, and brought each other immense joy and love. While described in articles as his fiancé, as the two were planning a wedding at the time of Bill’s passing, others who knew Bill refer to Donna as not a prospective, as-yet-to-be-determined life partner – but as his common-law wife.

Perhaps when he decided to stay for good, Bill bought a home in Old Metairie right by the canal. This decision proved unfortunate in 2005, when Hurricane Katrina flooded his house with ten feet of water and destroyed it. Bill enlisted the help of his family members and friends in the Coast Guard to gut his former home and volunteered his time to the family members of his co-workers to do the same. He also was working hard in response to the aftermath at the Coast Guard, for which he received commendation.

In 2007, Bill became an Environmental Protection Specialist, and moved into a 9 to 5, weekday position developing and managing communications response to disaster events. He honed his skills and knowledge, becoming a known expert who spoke at emergency response conferences around the country. Despite his expansive knowledge and noted, impressive skills, he was always self-critical and deeply concerned about doing the best job that he could. His co-workers poked good-natured fun at his unnecessary anxieties – like the time he accidentally lost a work cellphone and called the office, panicked that he would be fired. Of course, he was never at risk of that, but he was a perfectionist who defined himself with pride by his duties, and who was extremely dedicated to fulfilling his responsibilities fully. Former colleagues remembered him as “positive and professional,” and as a “witty writer,” as someone who “always had a smile to share, no matter the time of day, circumstance or conditions.” Fellow Coast Guardsman remembered him as “extremely dedicated and competent” to both his post and to his family and friends, as a “top notch guardian,” and as a “hero.” A former Captain wrote that Bill was instrumental in developing the 8th District’s Emergency Liaison Program, and that the “people of the Gulf Coast are safer by Bill’s work.”

In addition to being earnestly and deeply committed to his role in the mission of the Coast Guard, Bill was remembered by those who worked with him as being a guy that you could not help but like, as someone who was generous, kind, friendly and concerned for the needs of everyone around him. He was known for wandering into the watch station room even when he no longer worked there to keep feeling involved with the intensity of the direct duties, for creating epic firework displays on the lake for New Year’s Eve, and for drinking a half a case of diet coke a day.

Bill’s final work with the Coast Guard was in response to the Deepwater Horizon catastrophe in 2010 and 2011. His life of training and development was called into action as he worked months of 18-hour days, managing a communication network response to initial disaster and then extraordinarily complex clean-up efforts. He received a commendation for this work in June of 2011.

Bill was proud of being a member of the U.S. Coast Guard and lived a life that was emblematic of its most noble missions. He was buried in his uniform in Lake Lawn Cemetery in his second home of Metairie, Louisiana. His wife, his brother and sister, his brother and sister in law, his friends, his fellow coast guardsmen, his neighbors, and his fellow residents of the city of New Orleans depended on him, valued him, and loved him. 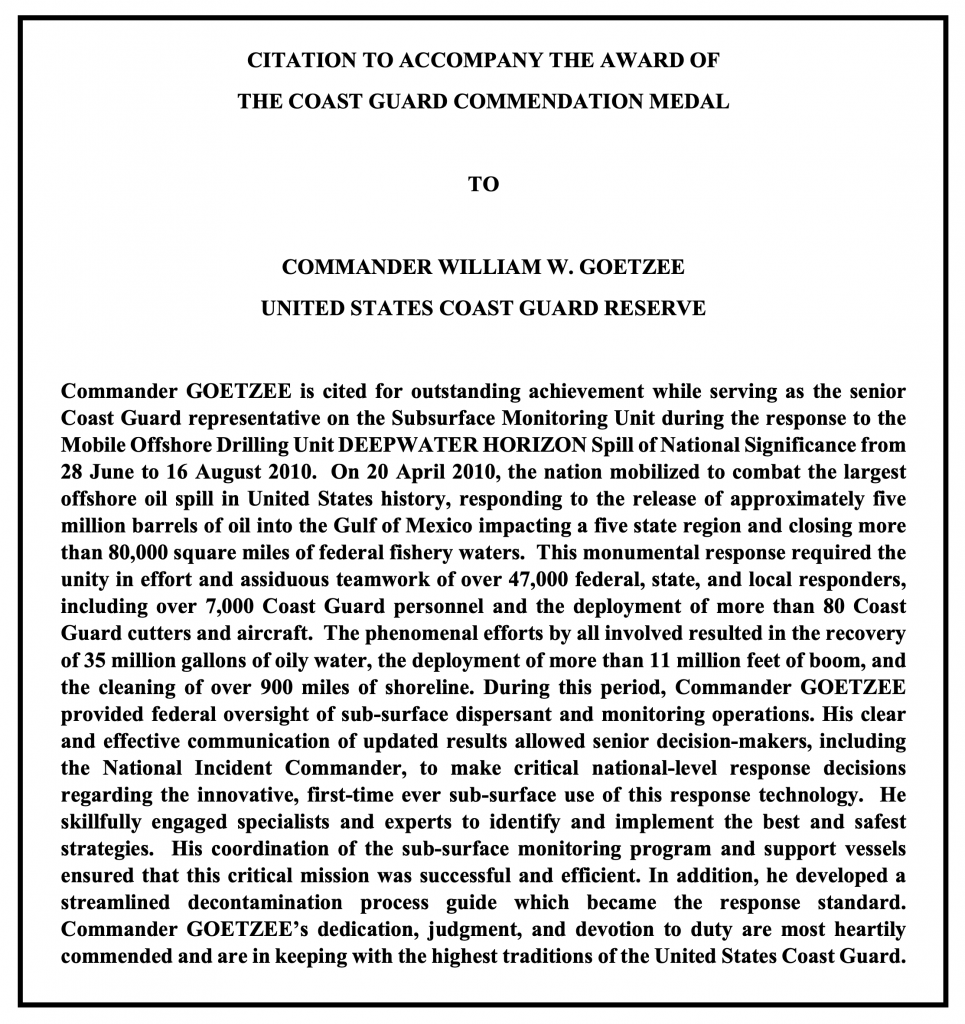