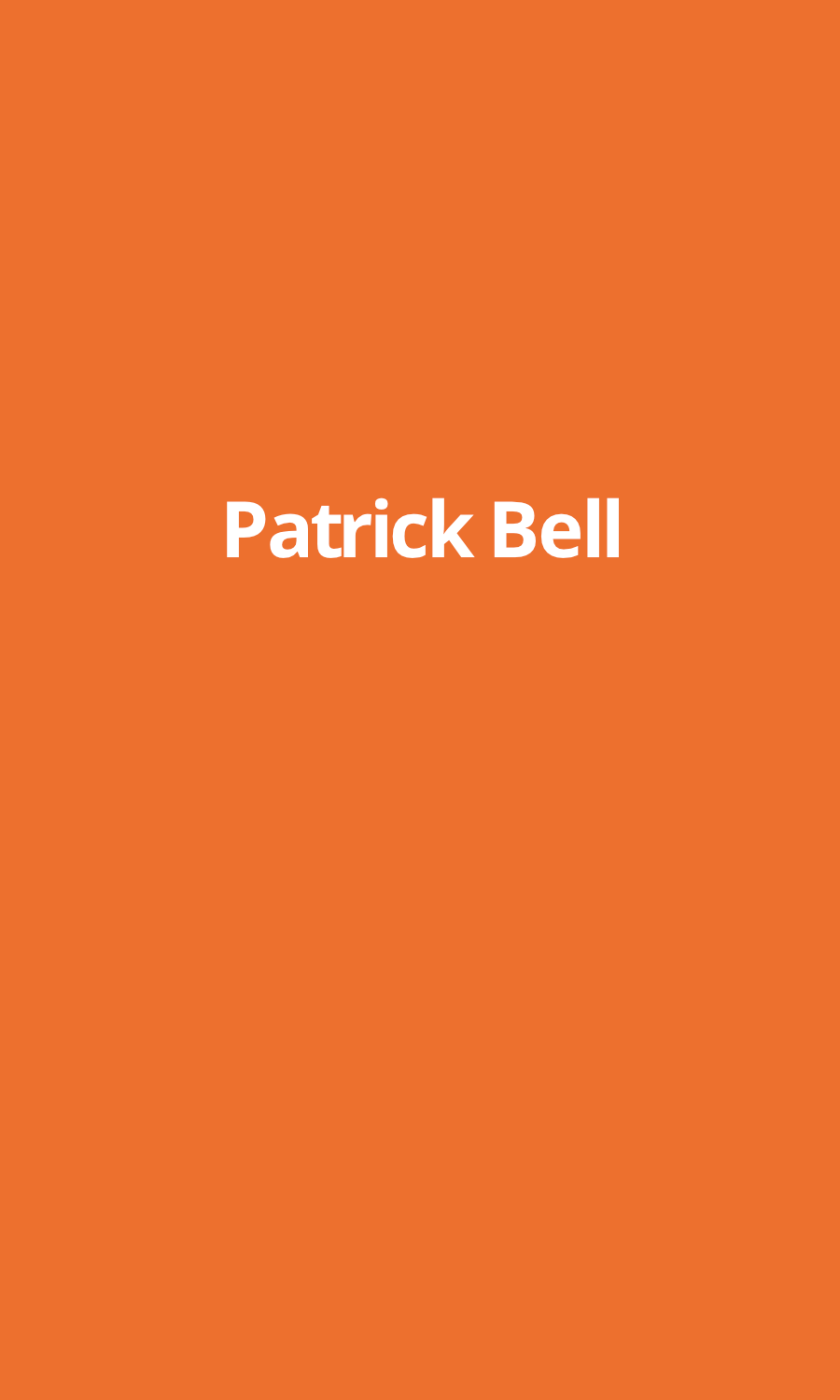 My search for Patrick Bell began with letters sent to the U.S. District Court in March 2013. Patrick B. Bell’s name appeared on a chart amongst the letters. His name was listed as one of forty unfortunate deaths suffered by people held in the Orleans Parish Jail. The letters conveyed heartbroken and grief-stricken pleas requesting the court to provide a safe, secure, and humane prison environment. Each letter illustrated the love people have for their families. The drafters prayed that others will not suffer the same nightmarish fate. Mr. Bell, however, did not have any family among the other drafters. Mr. Bell was born on November 7, 1960, and the criminal justice system took hold of him from 1989 till his death. On October 15, 2008, Mr. Bell died of HIV/AIDS.

The original objective of my research was to compile information and draft a biographical narrative on a person who died in the New Orleans jail. Mr. Bell, however, did not die in Orleans Parish Prison. He was released the day before his death.

The intended subject of this narrative aimed to tell the story of a person’s life. I hoped to highlight Mr. Bell’s family, education, work, community, and talents. Mr. Bell’s criminal record, however, provided the only account of his life. Like many African American men in Louisiana, Mr. Bell spent much of his life constrained by an unconscionable criminal justice system. As such, the trajectory of this narrative adapted to illustrate my pursuit for a narrative about Mr. Bell’s life.

The Orleans Parish Criminal District Court Docket Master provided the majority of the information on Mr. Bell. It unwittingly provided a narrative of Mr. Bell’s life. On January 1, 1989, the Orleans Police Department arrested Mr. Bell for his first offense—simple burglary. Mr. Bell was twenty-nine years old. Mr. Bell plead not guilty for reason of insanity. After the lunacy hearing, however, the court sentenced Mr. Bell to four years hard labor.

On May 13, 1994— a short time after his sentence likely ended— Mr. Bell was arrested for possession with intent to distribute crack cocaine. The Court sentenced him to five years in prison. Counsel Harry Tervalon represented him. Mr. Tervalon has not been an active member of the Louisiana State Bar Association (“LSBA”) since June 2, 2017. Mr. Tervalon never returned my calls.

On December 16, 1998, Mr. Bell was arrested for simple burglary and illegal possession of stolen things. Under Louisiana Code of Criminal Procedure Article 701— the right to a speedy trial— the court ordered his release. On August 29, 1999, the Orleans Police Department arrested Mr. Bell for theft. He plead guilty, and the court sentenced him to fifty days in Orleans Parish Prison. On February 24, 2000, Mr. Bell was arrested for theft of goods. The court sentenced him to four years in prison. Counsel Iona Renfroe represented him. Renfroe departed this life on October 26, 2013.

On October 23, 2004, the Orleans Police Department arrested Mr. Bell for possession of a firearm by felon, and his case went to trial. It resulted in Mr. Bell’s release on May 2, 2005. Shortly after, on June 20, 2005, Mr. Bell was arrested for theft of goods. Mr. Bell plead guilty, and the court sentenced him to 18 months at the Department of Corrections.

Public record requests sent to the Orleans Parish Prison revealed that Mr. Bell was conditionally released while at University Hospital. I assume they released him because of medical reasons that resulted in his death. The only property he had at release was medicine, and Mr. Bell had no visitors while in custody.

Early October, I spoke with a former Orleans Public Defender (“OPD”), Mr. Michael Kennedy. During our conversation, in a kind and causal tone, Mr. Kennedy informed me that he did not recall Mr. Bell. We talked about his past work with the OPD and how the court minutes often stated his name when he was not the attorney assigned to the case. He compassionately endured my questions and checked the court minutes. He asked which section of the court, and I replied, “M1.” At the time, I did not think to ask why he needed the section. I assumed he would use the information to check his records. After reviewing the minutes, he affirmed his lapse in memory. I concluded our conversation with a final question: “do you know a Keith Hurtt?”

Mr. Kennedy laughed and explained that Mr. Hurtt is an acquaintance he would run into at a bar. I planned to call Mr. Hurtt next, and I wanted some insight on him. I knew from checking the LSBA member directory that Mr. Hurtt had retired. Mr. Kennedy told me Mr. Hurtt operates a bike tour company in the French Quarter. Mr. Kennedy concluded the conversation by advising me to contact the OPD. I did to no avail.

Shortly after, I contacted Mr. Hurtt. I left messages on a few phone numbers I found online. After a week or more, I believed my attempts were ineffective; however, Mr. Hurtt returned my call. Like Mr. Kennedy, Mr. Hurtt respectfully tolerated my questions and was unaware of who Patrick Bell was. He asked me which section of the court Mr. Bell was in, and I replied, “Section I.” Mr. Hurtt displayed concern with his inability to remember a client that died in Orleans Parish Prison. Generally, he took note of events like death.

He asked me to read the docket master. I obliged. Once I read the words “release issued,” he stopped me, and with a sigh of relief, he explained that his representation ended at that moment. The final docket entry was October 14, 2008— the day before Mr. Bell’s death. That is when I learned Mr. Bell died the day after his release was issued.

After speaking with Mr. Kennedy and Mr. Hurtt, despite their kindness, I was troubled by their complicity with the system and indifference to forgetting Mr. Bell. Further, I was concerned that they knew more from the court section than Mr. Bell’s name and charges. I understand that this is a problem with the system itself, yet as advocates for justice, it is unfortunate that we become complacent. Mr. Kennedy and Mr. Hurtt were the only people that returned my calls. Not ready to concede, I continued my search.

Next, I researched news articles dating back to 1960 that included Mr. Bell’s name. I used the Newsbank database through the library. The vast amount of information that can be found in Newsbank impressed me; however, I still came up short. I spent hours inspecting articles and learning about the lives of other individuals.

As a result, my search left me discouraged and antagonized on behalf of Mr. Bell. I kept asking myself why. Why does it fell like his life has been swept under the rug? I began to wonder if Mr. Bell’s lack of a public presence was a premediated effect of incarceration. Incapacitation—the exclusion of people from society—remains and dominates as a grand tenet of our judicial system. Is our judicial system so effective to exclude unfettered aspects of a person’s life?

As my deadline drew closer and leads depleted, I began to question whether Patrick B. Bell even existed. Information from public records, library resources, death records, and attorneys of record conferred only what felt like long forgotten lore of an unseen specter. Except for the letters, there is no record of Mr. Bell’s death. There is no record that he owned property, registered to vote, married, filed for bankruptcy, had a judgement against him, or applied for a hunting & fishing license.

I believe the lack of records further illustrates what incarceration takes away from people—the hope of obtaining the elusive “American Dream” and the pursuit of happiness. I pray my fruitless search is not illustrative of Mr. Bell’s life. Instead, I hope Mr. Bell has a family to love and cherish his memory.