Professors Andrea Armstrong and Marcus Kondkar (Loyola University New Orleans) are proud to release two new reports on the challenges and opportunities in Louisiana’s criminal justice system. The study was commissioned by the Public Welfare Foundation. The reports are guided by data and interviews across the state and provides new insights on why Louisiana remains a national and global leader in mass incarceration. 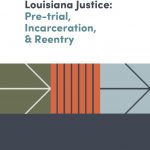 “Louisiana Justice: Pre-Trial, Incarceration, and Reentry,” provides a high-level system overview of Louisiana’s justice system from pretrial to incarceration to re-entry and includes new data and insights from local advocates. Data included provides the most recent snapshot of Louisiana’s prison population and the first close look at the impact of multi billing, or “habitual offender sentencing,” including significant disparities of the use of the multi bill in Louisiana. An introductory letter highlights two significant issues that have not previously been studied or analyzed: multi-bill sentences and local housing of the state’s prison populations. 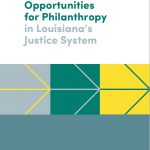 A companion report titled “Opportunities for Philanthropy within Louisiana’s Justice System,” includes recommendations for philanthropic organizations and suggests ways to support reform.“The best ideas bubble up from communities. That’s why the Public Welfare Foundation selected Louisiana as one of our jurisdictions of focus — despite being one of the nation’s top incarcerators, solutions are bubbling up from communities and for communities,” said Public Welfare President & CEO Candice C. Jones. “We hope that this report, developed by our partners at Loyola University New Orleans, will serve as the needed grounding to advance a new transformative vision of justice in Louisiana — a justice system that is actually just.”

“These reports combine on-the-ground perspectives from advocates across the state identifying the most significant challenges and opportunities for improving public safety with new data and analysis on the impact of incarceration statewide,” said Armstrong.  “Though Louisiana has made significant progress in reducing the state prison population, these reports are critical for understanding the local practices that drive our high rates of incarceration.”

The groundbreaking data and statistical analysis provided by Dr. Kondkar sheds lights on two key issues: the significance of race in the criminal justice system of Louisiana – there are significant racial disparities at every stage, particularly multi-billing – and the state’s practice of confining almost half of the prison population in local jails. Louisiana is relatively unique nationally in housing approximately half of its state prison population in locally operated jails instead of state prisons.

Louisiana remains one of the nation’s top incarcerators, and while the state over-incarcerates people for nonviolent offenses, the main drivers for Louisiana’s staggering incarceration rate are its extreme sentences and lengthy parole periods, researchers said. Louisiana is also facing a pivotal moment in youth justice, with forwards and backwards steps happening in tandem.

“Four parishes (Orleans, Jefferson, East Baton Rouge, and Caddo) in Louisiana account for half of the prison population serving life without parole sentences.  These same four parishes also account for half of all youth tried as adults,” according to Dr. Kondkar.  This makes for a perfect crisis, if social needs are left unaddressed.